I like having things neat and tidy, but I have to admit I can't keep it that way for long. I always think I'll clean it up later, but of course later turns into next week...or even longer. But there is one area of my craft room that always stays tidy. It also turns out to be one of my favorite parts of the room. 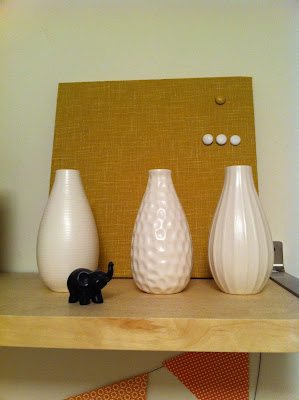 I initially bought the yellow pin board from Sally Shim on her etsy site to hold inspiration pictures. Once I received it in the mail, I thought the mustard linen was too great to hide with pictures, so I decided to keep it empty.

I love the texture of the 3 white vases from Ikea. I've thought about putting flowers in the vases, but I like the simplicity of them being empty.

The finishing touch is the little elephant my friend brought me back from her trip to Thailand. I think it's the cutest thing with it's trunk in the air and the little smile on its face.

It's a simple corner of a shelf, but I think it comes together well. I have to confess that my sister was the one who put the pieces in their place. I can't take credit for the arrangement, but I'm glad I get to be the one to enjoy looking at it!
Posted by val at 10:43 PM